This week has been a bit of an arse if I am being totally honest. Nothing has really gone wrong but I have felt tetchy and discontented since the weekend finished. Maybe it’s because I had such a good weekend or maybe it’s just one of those weeks. Either way, I found it harder than usual to write this, this week. I suppose this means that the fact that I wrote something anyway is an achievement in itself.

I’m hoping this is just a blip. Next week I have 3 whole delicious days off of work which I will be spending travelling to Manchester and London, seeing Sleater-Kinney play two gigs, seeing a whole heaps of lovely friends and eating loads of vegan food. 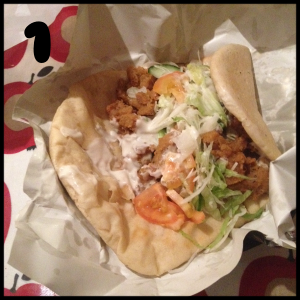 1. I was due to meet up with someone tonight to go through some paperwork over food. Both the places in town that serve vegan food closed early tonight so we ended up going to the chip shop near me to grab something to eat at mine. It’s different to any other chip shop I have been to though as it has it’s own dedicated veggie/vegan cooking area and seperate menu. I had this amazing southern fried chicken kebab with mayo and salad in a naan bread tonight. Totally vegan and one of the best things I’ve had in ages.

2. I woke up too late to bother washing my hair this morning so I sprayed a ton of this Superdrug dry shampoo in it. Although my hair felt kinda odd today, it looked pretty damn great and it gave it loads of volume and hold. I’m really enjoying having less hair at the moment plus it’s oddly liberating to no longer have the option to tie it back at work.

3. The meeting I had tonight was to hand over all the paperwork for a voluntary role that I did for over a year. Although I enjoyed it while I did it, it’s been nice to hand it all over and draw a line under it. I guess this item is just a little pat on the back to myself for doing it and passing it all over.

4. Usually when I finish a zine, I feel like I have exhausted my supply of things to say for a while. This time though, I have already started writing my next issue and making notes for another separate zine. I feel so inspired at the moment. There are various bits scribbled in notebooks as well as in emails to myself. It’s a nice feeling.

This weekend I’m off to InZine Fest III in Coventry. It feels strange to be going to a zine event where I live but it’d be nice to meet other zinester locally so fingers crossed!